Josh Stewart, a third-year Electronic Fire and Security Systems apprentice with Assure Alarms, is excelling in the World Skills competition. 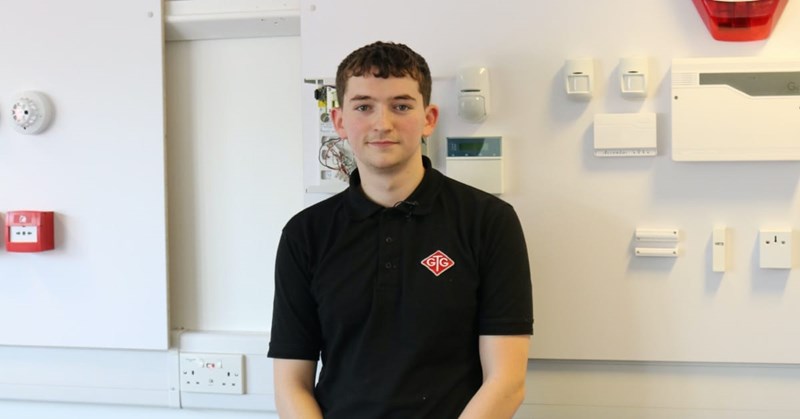 For one third-year apprentice, the focus hasn’t been solely on the day job – but his trainers wouldn’t have it any other way.

That’s because Josh Stewart is going for gold in the WorldSkills competition, a prestigious vocational prize that rewards excellence in a range of skill areas, including engineering, construction, and the creative arts.

Having progressed through two rounds of competition, Josh – a third-year Electronic Fire and Security Systems apprentice for Assure Alarms – has submitted a presentation which, if successful, will see him compete in the UK final being held, restrictions allowing, in London in the autumn.

Josh explained how for him, it felt like the opportunity to take part in a global skills showcase came out of nowhere.

He said: ‘When WorldSkills came up, I hadn’t actually heard much about the competition, but I wanted to get involved as I thought it would be a bit of fun. So, to get to the stage I’m at so far, I know it’s a great opportunity for me.

‘So far, I’ve done online assessments on fire and intruder alarm systems and had to submit assessments. I’m glad to have got through to this stage, which has been even more detailed, as I needed to create a presentation on a task – mine was to create a PowerPoint outlining the installation of an intruder alarm system in a listed building. In doing that, you’re assessed on your knowledge of these systems, and on planning, designing, thoroughness, and making a risk assessment.

‘That’s what you realise when you start the Electronic Fire and Security Systems apprenticeship. You think “Oh it’s just alarms” but there are so many systems to learn, and a lot to take in.’

For GTG-trained candidates like Josh, it’s not just the student who can be proud of their achievements, with the trainers also proud of their learners’ journeys.

Ross Weston, GTG training instructor and assessor, and Josh’s trainer, said: ‘For Josh to get this far is a great achievement. He has made the final 15 in the UK from more than 200 candidates, with eight going to London.

‘Taking on WorldSkills outside his own apprenticeship work, he is challenging himself and should know that getting this far is fantastic, no matter what happens next.

‘And looking forward, another beneficial aspect of Josh’s WorldSkills work is that the planning of tasks required for each stage will help Josh in his apprenticeship work, and beyond.’

Back in the classroom, Josh explained how he first became interested in his chosen apprenticeship path, and what he has studied during the three-year course.

‘In first year, we focused more on an introduction to the range of topics to be covered across the apprenticeship and learned about health and safety. In second year, we looked more at planning and installation, and in third year we’ve been working on programming and finishing jobs on our own – field work.’

And while Josh won’t know the results of his project for the UK final until September, he can’t help but look even further forward, to the prospect of the WorldSkills grand final in Shanghai, China, in 2022.

He added: ‘Obviously I need to wait now and see how my presentation goes for getting through to London, but to get all the way to Shanghai would be amazing, it’s a massive incentive.’

Meanwhile, trainer Ross hopes that Josh’s training journey and the outside opportunities it can offer will inspire others trained by GTG to put their all into WorldSkills progression in the future.

Ross added: ‘At GTG we’re always supportive of students and we’ve made Josh’s progression a priority. And from the trainers’ point of view, we want other candidates training at GTG, who come from companies outside the Group and are put forward for future WorldSkills competitions, to know that they would enjoy the same level of support and resources as a great candidate like Josh does.’