Gary’s career in the armed forces took him around the globe. Now he’s feeling right at home with GTG Edinburgh as a Transport Assessor. 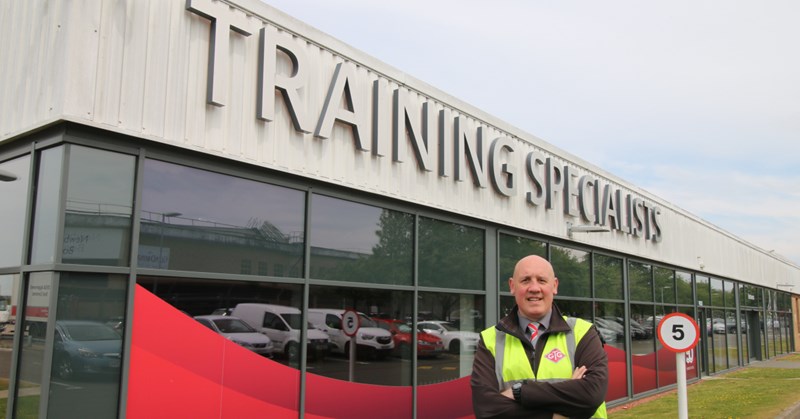 Former soldier Gary Nelson has turned his hand to a different kind of work – helping deliver driver training on a range of vehicles to the next generation of hauliers.

Sitting in the cab of an HGV must seem a world away from completing military operations around the world – from the frozen wastes of the Norwegian arctic to the stifling heat of Kenya – but Gary, who has worked for the past eight years in GTG Edinburgh’s Transport department, is more than happy with the change in his career.

Gary said: ‘I joined the Royal Scots as a 16-year-old infantry soldier in 1989 and trained as a mortarman. My early years in the army took me to tours of Northern Ireland, then to peacekeeping in Kosovo from 1999-2000, attached to the Black Watch.

‘In 2003 I was posted to Basra, Iraq, as part of Operation Telic, while closer to home I worked with a demonstration unit for mortars back at Warminster in England. During my time in the forces, I worked for eight years in Northern Ireland, and I enjoyed my tours there.

‘Another interesting aspect of being in the forces was the opportunity to travel to places such as Canada and Kenya, very different environments to work and train in. And I also got to work with other nationalities, such as the Danish army.

‘In my later years in the army, that’s when I got into more of an instructor role, training new recruits on weapons systems either side of another tour, this time to Afghanistan, and training time spent in Kenya. Getting into an instructor role gave me a valuable insight into delivering training to others.’

On leaving the armed forces in 2013, Gary’s path to becoming a trainer at GTG was not directly through resettlement – but after putting himself through training with GTG, at his own expense, his qualities had evidently shone through and he was approached about working with GTG on a permanent basis.

He explained: ‘I went through my resettlement at another training provider but was still unsure what I was going to do. So, I trained for 9-10 weeks in an instructor course.

‘I didn’t know what Civvy Street was going to be like; I hadn’t gotten any trade-related qualifications. I had done computer courses off my own back too but still didn’t know exactly what I was going to do for a job.

‘My initial resettlement was unsettling in that respect, as I seemed to be the only person in a group of 12 who didn’t have this great plan. At the same time, though, I asked about GTG to others who knew the company and word seemed to get around that I was interested in a role.

‘I also put myself through two weeks’ HGV driver training, again at my own expense, covering all vehicles, such as rigid trucks and articulated lorries, so that I could train people how to drive the larger vehicles on the road. Then, in the forklift course, I saw training being delivered and thought, “I could do this”.

‘When I started in January 2014, there was one lorry and two candidates, with only two instructors at our former site in Sighthill. Since then, I feel I have made good progress with more courses under my belt.’

Gary talked about GTG’s improved training spaces since joining the company and how he has found it as a place to work and teach the next generation of transport drivers, before becoming a driving assessor.

‘GTG gives you the platform to take on new courses and develop skills as an instructor. I’ve learned banksman and shunting courses and have been ‘shadowed’ while delivering new courses at the early stages to make sure I am getting the support and guidance to deliver the courses to the standard required.

‘You have a big responsibility in the classroom for shaping someone’s career, putting them through recognised national qualifications such as SVQs, training candidates up to work in a warehouse setting, or on-road environments with large, challenging vehicles. But I feel like I am a proactive person and, looking back, I think that was important. It’s allowed me to improve as an instructor and to become a transport assessor.

‘The assessor role sees me go around the country from Fort William and Oban down to the Borders – every day is different. But I see that as a good thing. Leaving at 2am to visit a candidate first thing in the morning? I say, “Bring it on!”

‘During the past eight years and more, GTG has been a great place to work. The company has treated me very well, and there’s a really friendly atmosphere among the people who work here. The facilities at GTG Edinburgh are fantastic as well for delivering training, and I can see how new technology we have available has been invested in during the time I’ve worked here.

‘What I would say to anyone going through the resettlement programme in the future, or even considering changing career to transport training from another civilian career, is that it’s up to you to change your career, your life. If you want something, go and get it. I feel like at GTG, if you really want them, the opportunities are there for you.’

Interested in a transport training role at GTG? Find out more at GTG’s  careers.