Jim Swan, known as Mr Swan to his students, has been an instructor at GTG since 1984 and has helped thousands of apprentices reach their potential. At the end of 2018, he was named Instructor of the Year at the Scottish Apprenticeship Awards, recognising his incredible achievements during his time at GTG. 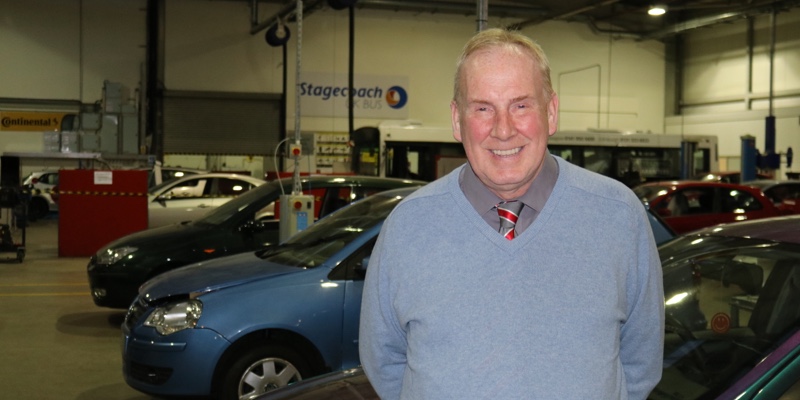 How did start your career at GTG?

It was something that I always wanted to do but it wasn’t really easy to get into. When I started at GTG it was at Somerville Drive and there was a small number of instructors. They were only doing mechanics with a wee bit of bodywork and a wee bit of paint. I was a mechanic at that time. I served my apprenticeship at Arnold Clark Vinicombe Street. Then I left Arnold Clark at 21 and I went to a company called Milngavie Motors and after that to Pete Road Motors. Then I had the interview and I got in. I always wanted to be a teacher. You can’t get a better job. GTG was flourishing and I think I joined at the right time. At that time, it was a group of garages that owned GTG and Arnold Clark was one of them. The board were not happy with the way the colleges were teaching the trainees so they decided to make their own centre and that’s how GTG began.

What’s your career progression been?

I’ve moved around within GTG. I taught primarily mechanics. I taught during the day but I can teach management and middle-line management and I did that in the evening classes. I did my TQFE (teaching qualification for further education) up in Dundee and that took nine months. Then I did my degree in education and management and that took me five years, but I did that long distance so I was only going to Dundee maybe once every three months for advice. That really opened my head up. I think if you start as a teacher, it’s like everything; you might have the qualification, you might be thinking you know it but you need to reteach yourself. The first five years were okay but after five years, I got better and better and better.

Have students changed over the years?

I think the young person comes out of school and the first thing they want is a job. We as a company are trying to fill that gap for them and get them into the workplace. I think the students’ thoughts have changed. They use Facebook and Twitter and you’d never have heard of that 20 years ago. Every class seems to have their own private network and it’s just a normal thing for that age group.

What are your proudest achievements?

If I can make a difference to a person’s life at the end of a day where they can say to themselves ‘I know that job a wee bit better’ – that’s a proud achievement. There are guys here who are area managers that I taught as 17-year olds. It puts a smile on my face when I see them. And we see each other because we work in the same places. That’s the top extreme but there are loads of people who are mechanics just doing a good job for Arnold Clark and doing well for the company.

And with GTG connected in that way to Arnold Clark, is it rewarding to see that journey?

I would like to think I’ve had a lot to do with the building of this company. My name doesn’t go up in lights and I don’t want that. I want to stand in the background and look at the guys I’ve taught. These young people gave me the standard and I went up the ladders with them. What they didn’t realise was they were coming up the ladder with me. As they helped me up, I helped them up. That is just the best of all. And you can see this company developing. I think apprenticeships energise the company. They certainly energise me.

A typical day is just what’s in front of me. I think GTG have got to the stage where they know that I can handle 99.99% of the stuff that’s put in front of me. And that’s just years of experience driving through and doing my best. People have problems, and it’s all about giving the answers to help them and that includes the parents.

What keeps you motivated?

Teaching - you couldn’t get a better job. It’s transferring knowledge. In here, I have a group of 12 people in front of me who are keen as mustard to learn about the motor car and just helping them build that knowledge because our job is to help people. That’s my motivation and that’s always been my motivation. Some people are motivated by money and yes, we need to pay bills, but you can’t go through five days not motivated. And I love teaching; I love passing on the education and I love talking to them. And they teach me. A lot of people think we tell them everything but it’s two-way.

As technology as progresses both socially and within the workplace, it must be important to keep your own training up to date.

I tend to do that in the workplace. It’s moving so fast. I think electric cars are going to be huge. I think we’re going to see driverless taxis in the next few tears. There was a film called Total Recall with Arnold Schwarzenegger years ago and that was the first time I ever saw a driverless taxi and I never thought twice about it but that is on our doorstep. They’re talking about trialling them up in Inverness right now so it just shows how close we are. We need to prepare the young people for that happening.

There’s certification coming out for electric cars as we speak, so the whole industry will need retraining on it. We need it because the environment needs it and we need to be seen as a modern company. We can’t sit back on our laurels.

What do you make of this your Instructor of the Year award?

Finally, tell us about the changes you’ve seen at GTG over the years.

Eddie Hawthorne has been great for GTG. And Carol Henry just pushes this company forward. I think our company is going to go from strength to strength.

It takes people like apprentices to energise me and energise themselves and bring more ideas of how we can move forward.

Mr Swan, thank you very much for talking to us.