Three of GTG's transport trainers talk about the career paths they’ve taken to become instructors and some of the challenges they've had to overcome. 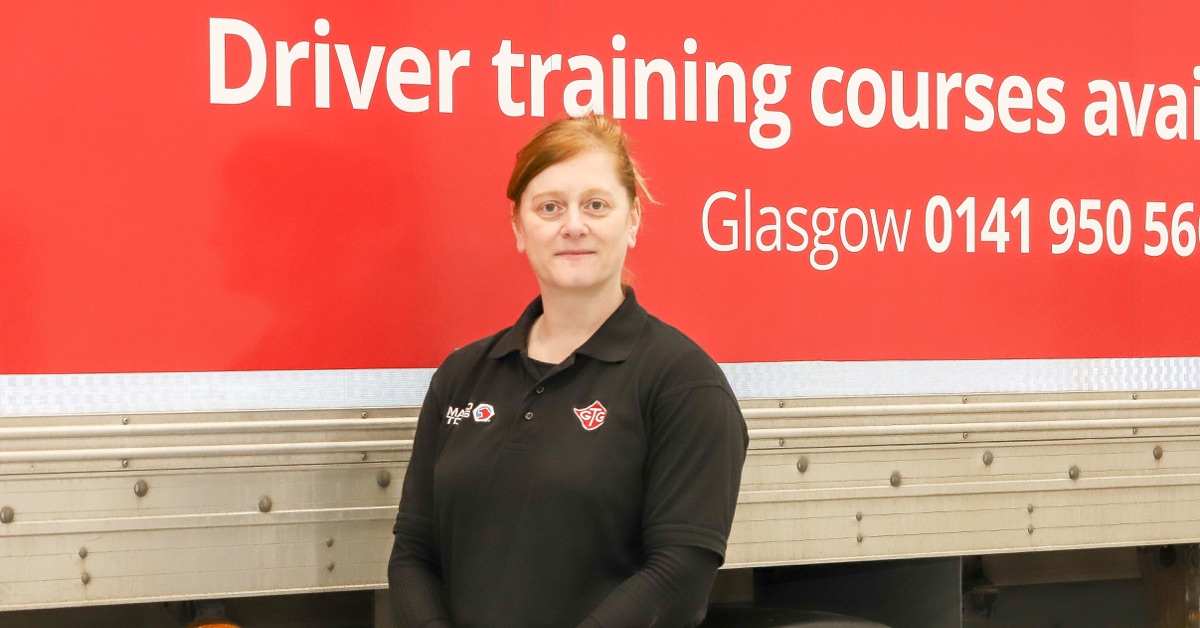 Tell us about your career so far…

‘I started working as a Class 2 driver in 1998. My dad was an HGV removals driver so I was used to being in the cab with him growing up. I got used to being underneath trucks, too, fixing parts, changing oil, things like that. So driving wasn’t my chosen career path – I sort of fell into it!

‘But even with my Class 2 I found it difficult to get jobs. I ended up working for ten years with European Metal Recycling (EMR) where I told myself I was a glorified scrap merchant!

‘After sitting my Class 1 HGV licence in 2008, I still found it hard to get work. I felt I carried the stigma of being a “woman driver”, so I decided to sit my bus driving licence at the same time, and I started driving service buses around my home town, Wolverhampton.

‘After a while doing short-term work, I completed my CPC freight course through GTG West Midlands. Paul Hastie was my instructor and told me I had different skills, and that I should get into teaching Transport courses. My dad had told me that many times, before he sadly passed away in 2019, but Paul has been something of a mentor and continued to tell me that he felt I could do much more.

‘I applied to become a transport trainer at GTG here in Wolverhampton, going through two interviews, and it has really snowballed from there! For the past seven months I’ve been working as a trainer, with Paul Hastie and Andy Stoddard as my mentors. We’re structurally a very sound team, and I know that if I need anything from them, they’re there to help.’

What do you love most about your job?

‘I love that even with 25-plus years’ experience in the transport industry, you learn new things all the time. Every day is a school day! And now, as a trainer, I’m learning more about myself, both professionally – from standing in front of a classroom full of men and delivering a module to not getting too emotionally invested if candidates don’t pass their course first time. That’s tough, because you’re spending four days with them and you might learn that they’re taking a Transport course to better themselves, or to provide for their family.

‘You also learn to trust yourself teaching people who’ve never driven a lorry before.’

What are the biggest challenges you have faced as a woman in the transport industry?

‘I’ve experienced gender discrimination at different times during my career. There haven’t historically been a lot of women in haulage and transport, and personally I’ve heard irrefutable, sexist workplace comments many times – but you’ve just got push on! Some potential employers in the early years of my driving career told me that I couldn’t be trusted to drive a lorry properly, with one telling me that I wouldn’t last two weeks. I even once worked a week’s trial for a company to prove that I could drive to the standard required.

‘But GTG is different. You’re treated as an equal, not wrapped in cotton wool. And if something’s not right, you’re told how it can be done better.’

Has there been any change in attitudes to women drivers in your industry?

‘The attitude towards discrimination here is a world away from when I started in haulage – this is a modern workplace and you just cannot say unacceptable things now. You prove yourself through your skills, not because you’re a woman.’

What advice would you give to someone looking to get into this line of work?

‘My advice for others thinking of working in this industry would be to take every chance you can, because if you don’t, you might end up kicking yourself. You’ve got to put yourself in the situation and be keen to learn.

‘At 46, I’ve changed the career I had since I was 20. I’ve put my career on the line but you’ve got to take an opportunity when you’re given it. I’ve been here for seven months and I’m not looking back – it’s a great place to be.’

How did you get into the transport industry?

‘I’ve been working in transport my whole career – I left school at 16 and worked with the Mercedes-Benz transport department in Scotland. I had a 13-year stretch in the Territorial Army (TA) and got my HGV licence while serving, and completed their driving instructor course.

‘I was then employed as a civilian by 242 Signal Squadron in Scotland and went on to work for Volvo’s truck and bus maintenance team. Then I worked for a transport training company for five years before I started working at GTG Edinburgh last April.

‘Transport has been a great career for me even though it wasn’t something I necessarily aspired to get into. It was the path I took and I’m really glad I did.’

As a woman, do you encounter any specific challenges in this line of work?

‘Even now there are far more men working in transport than women, and certainly when I started, a woman in the industry was pretty rare.

‘But I’ve always been in a male-dominated environment, growing up with three brothers, and serving as a reservist, so it’s never bothered me. I’ve been around men who it’s fair to say didn’t mind their Ps and Qs!

‘At the same time, I haven’t experienced male chauvinism during my career. Whenever I’ve needed help to improve professionally, it’s been there for me – I’ve just had to ask. And anyway, I don’t expect privileged treatment because I’m a woman working in transport. I’m out there training candidates in the cold, in the snow, just making sure I’ve got the appropriate clothes on; I’m not worrying about going back inside for a heat!

‘The only thing you still get is when you meet new candidates – you see them looking at you, thinking: ‘Oh no – is it the woman who’s training us?’ before you’ve even started. 95% of the candidates are male and there are always some who will, for whatever reason, doubt what you’re telling them, so the best way to deal with that is to be confident, trust in your knowledge and deliver the classes to the highest standards.’

What do you get out of your role?

‘I like that from day one, my candidates are my responsibility. You can focus and put your energy into getting a candidate through their test for whichever driving qualification they’re going for.

‘It’s the small things involved in the course that you enjoy doing, too, like meeting and greeting the candidates, setting up manoeuvring areas depending on the vehicle’s size.

What advice would you give to someone looking to get into transport?

‘I think in general you need to believe in yourself and be confident. Self-belief helps when you’re delivering training.

‘And when you become an instructor, I would say to look at the feedback you get from candidates. Positive feedback is great to see – it’s nice to get a bit of recognition from those on the course – and it builds confidence in yourself.’

Tell us about your transport career so far…

‘I joined the army at 16, signing up with the Royal Corps of Signals, serving both at home and over in Germany, and passed my HGV licence at 18. I stayed in the army for five years and as soon as I left, back in 2001, I became a Class 1 driver and did continental driving back and forth to Germany. I was based in Dover at that time, so it was a good starting point!

‘After this, I worked doing night shifts at a parcel firm, where I met my husband, and that’s how I ended up moving to Scotland! I transferred to their depot in Cambuslang and I’ve been living in Scotland ever since.

‘I had never really thought about instructing, but then when I lost my job, I found work with another company and put myself through as many courses as I could. That meant I could gain experience in instructing and I worked as a trainer for two years before joining GTG in August 2019.’

What do you love about the transport industry, and your role in particular?

‘Working in transport is give and take, depending on the nature of your work. In some haulage roles you can be away on the road for nights on end, travelling long distances and living out of your cab, but when you’re working at GTG as a full-time instructor, the pressure is self-imposed because you’re focused on getting your candidates to pass.

‘You meet new people every week, and spend four days training them, and learning about their motivations to sit their course; to earn more for their families, to change career – it could be anything. You really do care if they pass or fail.

‘What I like best is meeting the new people on the course, sharing knowledge with them, and hopefully watching them make progress in turn. It’s brilliant when they come back with a pass certificate – you’re really happy for the candidate.’

As a woman, do you encounter any specific challenges in this line of work?

‘I’ve never been treated any differently because I’m a woman. Granted, I’ve seen people staring when I’m reversing a lorry! But across my career I haven’t been singled out because of my gender. Perhaps that’s surprising given it’s a male-dominated industry but it’s not something I’ve experienced.

‘At GTG, too, it’s a modern and progressive workplace, so that sort of issue doesn’t come into your working day.’

What advice would you give to other women who want to join the industry?

‘If you’re coming into the transport industry, be patient in finding a role, because your dream job might not be available straight away. My advice would be to get industry experience and work out exactly the type of role you really want to do.

‘Then, when you’re delivering courses, you’ll be trying to get candidates to come back for other courses in future. I can still remember my Class 1 driver trainer from 1998 and the personalities of the others who were on the course with me, if not their first and last names, and that shows that your own learners will remember what you were like as an instructor. So you’ve got to create a positive experience for learners, even if they don’t pass.’

Have you got what it takes to be a transport trailblazer? Find our Transport course range here.