We spoke to Andy Rundell about the new chapter in his career, and being one of the prize-winners at the 2019 Transport News awards. 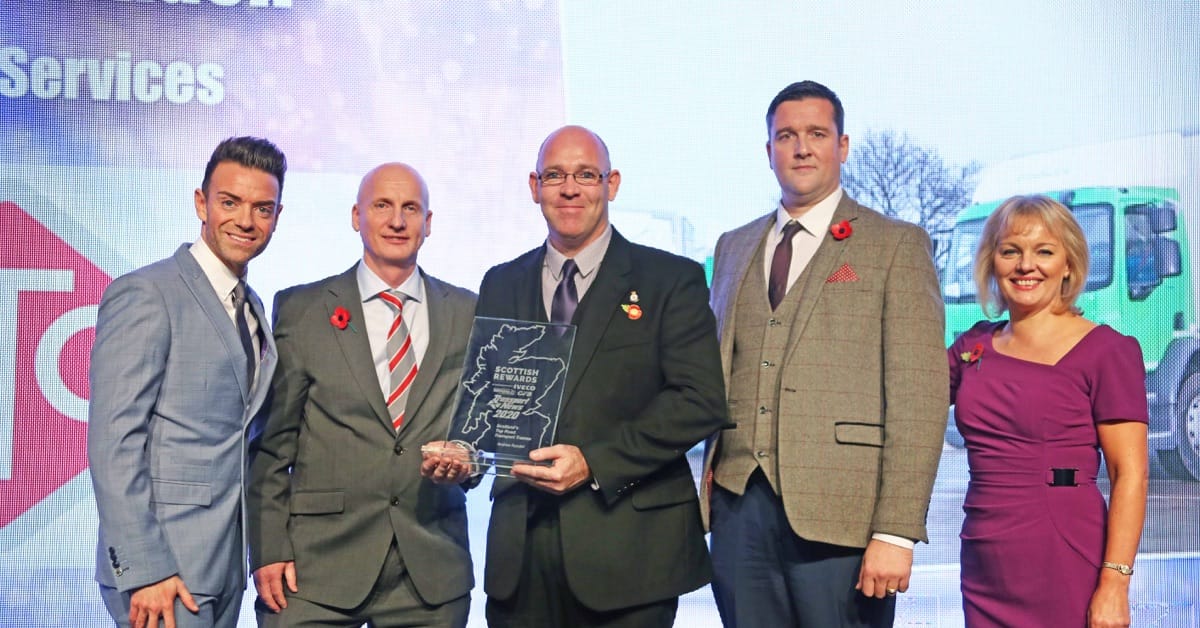 Why did you choose to retrain at this point in your career?

‘I was in the Scots Guards for almost eight years, and served in Iraq during the Second Gulf War. It took me a little time to settle back into civilian life, or ‘Civvy Street’ as it’s called in the forces. One Thursday I was on patrol in Basra, and by the next Wednesday I was back home and a civilian again. It can be surreal.

‘Since then I’ve had a number of jobs, including being a support worker for young people with mental health issues, but I couldn’t see myself being in the role long-term. I was proud of my army role, and I missed the camaraderie, the banter, the hard graft.’

Why did you choose GTG?

‘I had started racing for an ex-forces rally team, and at a meeting at Crail in Fife, Neil Warnock, a GTG driver trainer and former soldier, approached me about retraining as a Category C driver. I knew this was the spurring-on I needed and I looked into courses.

‘Because it was before the time of resettlement for forces veterans, I had to look into the cost of putting myself through courses, and where to retrain. GTG was an affordable course, and it ticked all the boxes in terms of what I wanted to achieve.’

Which course did you enrol in?

‘I took the Category C Driver course. That lets you drive vehicles weighing 3.5 tonnes and over.’

In what ways did the team and trainers at GTG help you?

‘The instructors were really good, speaking to you on your level, like a person, rather than a teacher to a student. At the same time, they’re really thorough in their training, they strip away all the bad habits. You learn to drive all over again!’

What was your favourite part of the training?

‘The only experience I had of driving bigger vehicles was in the Warrior armoured vehicle when I was serving in Iraq, which weighed over 25 tonnes, so feeling like you’re making progress driving the Category C vehicle was brilliant. From the first drive you do, to manoeuvring in tight spaces, the course gives you such a confidence boost.

‘Neil Warnock ended up being my trainer, and Christine Hughes who set up my training at GTG was fantastic as well. She helped me with any issues I had and came to speak to me at every stage of the process. I felt they went above and beyond what was expected of them to help me.’

Where do you work now?

‘I work as a Category C lorry driver for Fishers at their site in Coatbridge, delivering clean linen, tablecloths, towels and bedsheets, and any other type of laundry, to hotels and restaurants across Scotland and northeast England. I’ll then pick up the used laundry and bring it back to the site here in Coatbridge.

‘It’s funny because I knew Fishers from my time spent working in a Glasgow hotel after coming out of the army. I knew some of the drivers and they were always very friendly and professional, so that left a good impression.’

What parts of your new role do you enjoy most?

‘It’s quite a physical job so it keeps you active during the day – I’ve lost three stone since I started! It’s good to go home and know you’ve done a good day’s work. And because we work across the country, there are several different routes we do, to Newcastle, or Carlisle, or up to the Highlands, but you’ll always get the chance to travel with an experienced driver to learn the route first, which helps a lot.’

You recently won a personal accolade – what can you tell us about that?

‘I won the Road Transport Trainee of the Year award from Transport News for 2019 in a ceremony at the Crowne Plaza in Glasgow. It was a huge ceremony, with more than 600 people there from across the transport industry in Scotland. The prizes were chosen by the editor of Transport News.

‘We had a welcome champagne breakfast, there were celebrities there – it was all quite overwhelming. And to win, that was phenomenal. I’d again like to thank Neil Warnock for putting me forward for the award, and Fishers for their encouragement.’

What are your goals for the future at Fishers?

‘There is huge scope for advancing your career as a part of Fishers. They have a great track record of taking on new drivers and helping them thrive in the company. The team leaders here were all drivers at one point, so it’s good for me to see that they give new employees a chance to progress. I’m happy here.’

What would you say to other people considering retraining, but who haven’t taken that step yet?

‘It would be to trust people giving you advice. You’ve got to take opportunities, because there is work out there for ex-service personnel. I’m lucky because I feel that GTG supported me all the way. I’m really enjoying my new job – I’m four months in, and I haven’t looked back.’